Warning: Declaration of ET_Theme_Builder_Woocommerce_Product_Variable_Placeholder::get_available_variations() should be compatible with WC_Product_Variable::get_available_variations($return = 'array') in /home/zotiqa66/public_html/funionaire.com/wp-content/themes/Extra/includes/builder/frontend-builder/theme-builder/WoocommerceProductVariablePlaceholder.php on line 8
 Writing my First Fantasy Adventure Novel - Funionaire Press

Yes, I wrote a coming-of-age fantasy adventure novel – Return to Isle of the Shallows – for teens and young adults. However, it’s a good book for any age. More adults told me they enjoyed reading it than I had anticipated. “My imagination was flying high and so was I,” one of my readers told me. Another said, “I could visualize the two different worlds and felt like I was right there with the characters.”

Return to Isle of the Shallows synopsis

“Drew Barret is about to start a new school after being suspended from the last one for fighting. he hopes he can survive the semester without running into bullies or becoming one himself, but his fiery temper keeps getting him into trouble. When he’s snatched away from the lake near his home by a mythical monster, he finds himself trapped in a fantastical world, held captive by a maniacal beast, putting his true nature to the test. With his family and best friend, Trev, venturing into the world of Aqualor to find him, he relies on their support to help the Arvaks, Winged-Groshin and Lamera find peace and freedom in their homeland. Together, they experience a wild adventure and witness Drew’s journey of self-discovery as he battles to control the rage within him.”

There’s nothing like finishing a book, especially after a decade-and-a-half. Yes, you read that right – a decade-and-a-half! I am an author and an artist, however, I am a wife and mother first. Therefore, I wrote and painted whenever I had the time, which was sporadic.

The first draft of Return to Isle of the Shallows was written in six months and was originally titled Drew Burrows, A Long Journey Home. I began the book in 2003 when my children were eleven and five years old. I used to make up bedtime stories for my children when putting them to sleep at night. One day, I decided I wanted to try my hand at writing a full-length novel, but when was I going to have the time? Well, I decided to just sit and type while they were at school. And, in six months I had the first draft completed.

Where is my draft?

Then, we moved a couple of times while living in the Bahamas and I lost the draft transcript. Ten years later, my children asked me about the book and told me they would like for me to complete it and publish it. I had no idea how to do that nor did I know where it was located. Worse yet, how would I be able to do this? I was, now, homeschooling my daughter, Angelique Sabrina, while she was working on her entertainment career and we were traveling throughout the United States.

I decided to just do it; to figure it out. In between our travels, I did a thorough search of my home and storage. Finally, I found it, literally in the last container in our storage area. However, it was on a CD and my new computer did not have a CD player. So, guess what I did? Yip … I purchased a converter and voilà – I printed the manuscript.

Even though I had it on my computer, I could not edit it. It was in PDF form and I had no idea at the time how to convert it to Word. So, I began retyping. As I typed, I made changes to the storyline to make it more compelling and adventurous. Once this second draft was done, I asked some avid readers to give me their feedback. After I was clear of changes that needed to be made, I began another rewrite. I changed character names, honed personalities and bettered the fantasy location descriptions. I was loving the process. With each day that came, I found that I could not wait to write. I loved the world I was creating and hoped that others would too.

Soon, we had to move again. This time from Nassau, Bahamas to California. Our children needed to move to improve their careers so my husband and I made it happen and we all packed up and left on the adventure of our lives.

Once in Northridge, California, settling in took some time and it was another year before I could think about editing and rewriting the book. I decided to look into getting a professional editor with Reedsy and realized there were different levels of editing – editorial assessment, developmental editing, copy editing and proofreading.

I sent in my draft and received feedback from the first editor. I realized I had much to do before the book was ready for copy editing. So, over the next year while helping my daughter with her acting career, I did another rewrite. This was stressful but fulfilling. I worked everyday morning until night rewriting.

Suddenly, my husband and I decided it was time to do something we had longed to do – travel across the United States in an RV. Because I felt I really needed a break, I relished in this new chapter. While Gregg and I searched for the right RV, our son looked for and found an apartment within our complex that was, now, a better fit for our family. Yes, we moved yet again but this time it was more exciting and nowhere near as stressful as our previous move. Our children stayed in the new apartment while Gregg and I traveled. We began blogging and I also began painting. I put my book on hold. I needed this break!

After returning to California, I went full force into rewriting my book. Almost a year had passed when we realized there was a big decision our family had to make. It was time for us to separate and, quickly, it happened. This was tough! Our son, Tristan, moved to Seattle to concentrate on his photography full time. Our daughter, Angelique, moved into her own apartment in the city of Los Angeles. My husband, Gregg, and I packed up and drove to Florida to look for a home. It was time to be near my mother, who was now seventy-eight years old and had moved from The Bahamas the previous year.

Within ten days, we purchased our home! Yip, we don’t waste time! Once settled, I put pen to paper and finished another draft and sent it off to my new copy editor with Reedsy. We went back and forth for approximately five months. When we were both happy with the final draft, I had it proofread. Now, it was ready for the cover and design layout stage.

I moved right along and, yet again, utilizing professionals at Reedsy, I hired a book cover and interior design artist. I described what I wanted, sent her drawings, pictures and ideas of other covers I liked and she went to work creating the book cover and interior layout. Three months later, we completed the book. I was ready to see it and hold it in my hands. It was time to order the actual book from BookBaby.

I ordered a paperback prototype of Return to Isle of the Shallows and waited with bated breath for UPS to deliver it. When I opened the box, tears filled my eyes. I realized I had accomplished my dream. I felt lighter. The stress of finalizing a longtime dream had dissipated. I did it. I had completed a full-length fantasy adventure book for teens – something I had wanted to accomplish for two decades. I was ecstatic! However, reality set in and I had to get back to work. There was still so much more to do.

The feeling of euphoria gave me the strength and courage I needed to go on and I did. I completed the ePub and uploaded it to BookBaby. While awaiting the conversion, so they could distribute it globally, I put my all into marketing on Instagram and Facebook. I got to work! I began preparing for the Pre-Sales with BookShop, Amazon, Kindle and other stores around the world.

I decided I may as well do everything – paperback, ebook and audiobook. So while speaking with a fellow Bahamian, Ronnie Butler, Jr., who is an amazing narrator, he suggested I do an audiobook since a lot of people, who travel a lot, prefer audiobooks. So yes, an audiobook is in the works as well!

Although everything is not complete and I am still working on the marketing and PR for the launch of Return to Isle of the Shallows in mid-August, I am pleased with the progress. I am reading as much as I can about the best way to market my book. Yet, I am doing my own thing because that’s the way I do it. Haha! Actually, the truth is, as much as I appear to be an extrovert, I am quite the introvert. Therefore, I realize I have to do what feels most comfortable for me and what I know I can do to the best of my ability. So, wish me luck and follow my progress. 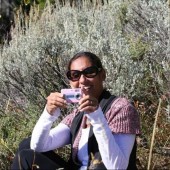 Painting is Therapeutic, Enjoyable and Satisfying

What I do when I’m feeling overwhelmed

Some of the links in this post are 'affiliate links.' This means if you click on the link and purchase the item, I will receive an affiliate commission